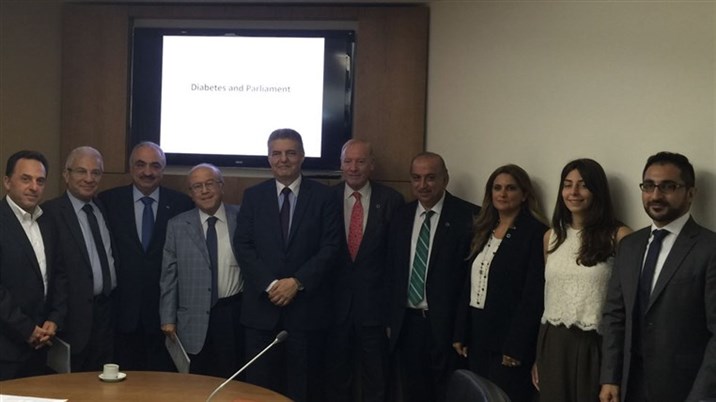 Meeting on how parliamentarians can improve Diabetes in Lebanon
DONATE ONLINE
SUPPORT THE CAUSE
SPONSOR A CHILD DONATE BLOOD INDIRECT SUPPORT
RESEARCH STUDIES AUDITORIUM RENTAL GIFT CORNER
Who we are
The Chronic Care Center is a medico-social institution, specialized in the treatment and follow-up of childhood chronic diseases: Thalassemia and Type I Diabetes.
Our Clinical Report
The clinical Report is a result of continuous research on Diabetes and Thalassemia. It covers all facts and figures, and a overview of the Clinical Centers Yearly accomplishements, along with acccurate cost of treatments.
Download the Report
EVENTS & ACTIONS

Meeting on how parliamentarians can improve Diabetes in Lebanon

On October 7, 2016 a meeting was held with members of parliament of the health committee headed by Dr. Atef Majdalani to discuss the importance of diabetes and how parliamentarians can improve Diabetes in Lebanon.
The meeting was attended by parliamentarians (Dr. Atef Majdalani, Dr. Naji Gharios, MP Mohamad Kabbani, MP Serge Toursarkissian, MP Mohamad el Hajjar),   Sir Michael Hirst, former president of the IDF and the Chairman of Global network parliamentary champions for Diabetes, by Dr. Mohamad Sandid representing the Lebanese Diabetes association, Michele Abi Saad (on behalf of Mrs Mouna Haraoui) representing the Chronic Care Center and Mr. Toufic Eid for Novo Nordisk.
The Chronic Care Center presented the situation of Type 1 Diabetics in lebanon and the challenges faced by the youngsters.
At the end of the meeting, Sir Michael Hirst invited the parliamentarians to join the Global network parliamentary champions for Diabetes and give the following comments on the chronic Care Center:
- He visited the Center last year and was very impressed with the quality of work and the testimony of patients and parents
- The Center is comparable to the best Centers in the world (comparable to Joslin Diabetes Clinic in Boston)
- The Center is a jewel that the Lebanese government should be proud of. It should be a jewel on their Crown
- The Government should support more and more the Chronic Care Center.
Dr. Atef Majdalani thanked Mrs. Mouna Haraoui for the work done at the Center.